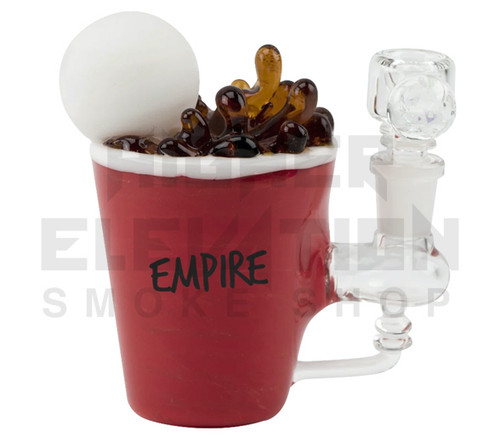 The Empire Glassworks beer pong mini dab rig is a classic red cup with a marker empire logo and a pong ball on top that acts as the mouthpiece. It’s is a celebration of summertime fun, all in the palm of your hand. This little dab rig packs a big flavor with super-smooth diffusion for very chill hits. Best of all, this chill glass deserves a top shelf space for its power but is happy to let you savor its look too. The fun is both inside and out with this hand-crafted glass.

Empire Glassworks pieces are proudly made in the USA and are sure to become a flagship addition to any collection!

What's in the Box:

Berning Glass Octopus Rig    Beautiful Jeff Berning 5" Tall Octopus Bottle. Each is hand crafted and one of a kind.  (includes a 14.4 Banger)

The Premier Smart Dab Rig The innovative minds at Puffco designed the Peak to replace the traditional torch and rig system without compromising any quality or functionality. This electric dab rig...

Scout 20" Rolling Hard Case Overview. The Scout 20R by Revelry Supply is an easy to handle transport hard case. Wheels and multiple handle options make this our most versatile case for...

Science Meets Art  Envy Glass Designs create advanced and unrivaled quality products. All of their pipes produced in their warehouse in Southern California, using only the highest quality Boro...

PUFFCO PEAK PRO - BLACK Overview The Peak Pro represents a new standard for concentrate consumption technology. For the beginner, it's the most efficient and seamless way to experience the...

Crystal Disc Perc Bong Envy produces scientific water pipes that have heady features. They are experts at blending these two typically opposing aesthetics together successfully into one clean and...

Get the latest updates on new products and upcoming sales

Our products are intended for tobacco or legal use only. You must be 21 years or older to browse this website and purchase products.